"To me," said [Paul], "Who am less than the least of all saints, was this grace given." What grace? "To preach unto the Gentiles the unsearchable riches of Christ, and to make all men see the administration of this mystery, which for ages past was kept hidden in God, who created all things...."
Paul himself was sent to the Gentiles, the other apostles to the circumcised. The more marvelous and astonishing commission was given, said Paul, "to me, who am less than the least." This, too, was of grace: that he who was least should have the greatest things entrusted to him; that he should be made the herald of these tidings.... 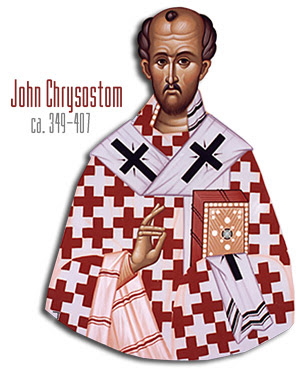 He calls it a mystery for this reason: neither did the angels know it nor was it manifest to anyone else....Angels knew only this, that "the Lord's portion was His people" (Deuteronomy 32:8-9)....For the Gospel says: "He will save His people from their sins" (Matthew 1:21). Not a word about the Gentiles. But what concerns the Gentiles, the Spirit reveals. The angels knew that the Gentiles were called. But that they were called to the same privileges as Israel, yes, even to sit upon the throne of God, who would ever have expected this? Who would ever have believed?....
It is evident from what the apostle himself has written that God has done "abundantly above all that we ask or think." For I indeed pray, said Paul, but He of Himself, even without any prayer of mine, will do works greater than all we ask, not simply "greater" nor "abundantly greater," but "exceeding abundantly." And this is evident from "the power that works in us," for neither did we ever ask these things nor did we expect them.
"Unto Him be the glory," [Paul] concludes, "in the Church and in Christ Jesus, unto all generations forever and ever. Amen."
-- John Chrysostom

Jesu Juva,
Soli Deo Gloria
Posted by Leif.Halvorson at 9:00 AM