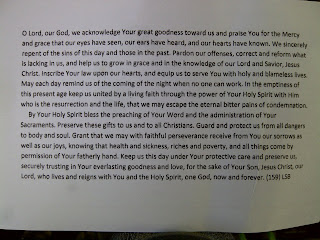 Took a load into the beet dump this morning and found it to be a muddy mess from yesterdays rain. It's not so much soupy as is greasy. I had difficulty on a piler this morning as did a fellow crew member. I ended going to a different piler that's a bit steeper, but, provided better traction. I was able to make it happen on the first attempt.

Each day the ladies in the scale house put up riddles in the windows for the drivers to read and figure out while we're parked on the scale. Since today is Sunday, I'm wondering if that's not the reason why this next particular expression was posted. It read: "The owner of a wore out Bible is seldom in the same shape." A post-it note was stuck on it later that read: "Mine looks new :( ". (Yes, there was a frowny face on it.)

Here's the implication: a moral. If you spend enough time in God's word you won't have to face struggles or strife because you're pleasing Him or using the Bible as a "life guide". Spend more time using the Bible and you'll live a better life. What we have there is moralism, bondage to the law. It's not the Gospel.

Another one that was put up this last trip in to the beet dump was: "The greatest gift you'll ever receive is family." Now, I'll admit, my family is very important to me, and I believe they are a gift from God, however, as much as I love my family, the greatest give anyone could ever receive is salvation by grace alone through faith alone in Christ alone.

Lord of the harvest, please protect our crew and the other crews working this harvest. Thank you for your salvation. Jesu Juva, Soli Deo Gloria. Amen
Sent via BlackBerry by AT&T
Posted by Leif.Halvorson at 9:46 PM