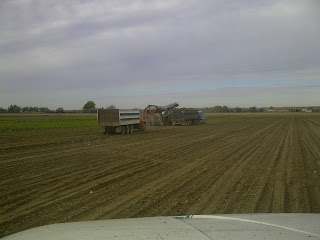 Today we started at 7am, which was nice for me. I had counsel time at AWANA lastnight and then private communion with my pastor. We are so blessed to have him as our pastor.

You can tell we're almost done with harvest. As soon as you pull off of the scale you usually have your pick of which piler you want to go to and drive right on. This afternoon my wife and my girls are coming out to ride in the truck with me. I'm really looking forward to that as tomorrow will likely be my last day of driving for beet harvest. We'll probably finish up early Saturday. The ground we're on today is pretty sandy.

Been listening to an Issues Etc. about Joel Osteen. So far my favorite part was when they played a clip of Osteen talking about being entitled to ancestral blessings that you don't deserve but God gives them to you anyways on account of someone in your family who is deceased had great faith and had done good stuff for God. Todd, rather befuddled, then says to his guest, Larry Rast, "What in the world Larry?" Larry responded with "I was hoping you had the answer to that one!" I laughed so hard. I was just as aghast as Todd and Larry. That's one heck of an implication. God's accountable to us on account of the worthless stuff we do? Give me a break Joel...


Lord of the harvest, please protect our crew and the other crews working this harvest. Thank you for your salvation. Jesu Juva, Soli Deo Gloria. Amen
Sent via BlackBerry by AT&T
Posted by Leif.Halvorson at 11:20 AM